We are Part of a New Paradigm Shift in Consciousness

The Earth Dollar acknowledges that Mother Earth is the source of all life and the foundation of all wealth. The water we drink, the air we breathe, the food we eat, the clothes we wear, and everything in our home is produced from the treasures of Mother Earth.

Mother Earth (aka natural capital) is the source and foundation of all other types of capital, including financial capital, manufactured capital, social capital, and human capital. Therefore, the health and wellbeing of Mother Earth are necessary for the future of humanity. This means that the main source of all wealth on Earth is natural capital assets. 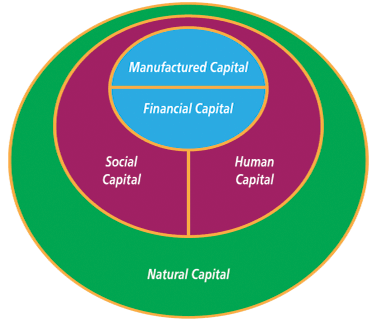 The Earth Dollar is bringing on-chain natural capital assets, which is one of the world’s largest asset classes, representing $145 trillion annually in unmonetized assets. The Earth Dollar is introducing a new way of generating wealth, prosperity, and abundance on the blockchain by protecting, restoring, and revitalizing the Earth, including restoring our climate to pre-industrial levels. This is done by modeling the World Bank’s Natural Capital Accounting System on the blockchain to build a new alternative economic system which we call the Living Economic System. In the new Living Economy, as the Earth (natural capital assets) is restored, more trees are being planted, the waters are purified, and the climate is restored, the Earth Dollar increases in value.

The Earth Dollar is a currency based on LOVE and backed by the health and wellness of Mother Earth (natural capital assets). The Earth Dollar was created for the love of the Earth and all life that dwells on her. Since love is difficult to quantify, up to $5.28+ trillion in initial assets have been pledged on-chain to back the Earth Dollar in order to restore the Earth and the climate, while simultaneously ending global poverty. The Earth Dollar provides liquidity to reinvigorate the global economy ravaged by the impact of the COVID-19 pandemic, climate change, unsustainable cities, the extinction of species, joblessness, poverty, rising cancer, and disease rates, and other crises without putting an extra debt burden on countries and taxpayers.

The initial assets pledged consist of platinum group metals (gold, silver, platinum, palladium, rhodium), natural capital assets, real estate assets, manufactured assets, and creative assets via NFTs. These are only the initial Assets pledged to back the Earth Dollar; we expect even more assets in the future.

EARTH DOLLAR IS AN IDEA WHOSE TIME HAS COME

The idea of natural capital assets being valuable is going mainstream. Water futures started trading on the Chicago Mercantile Exchange in December 2020. On January 21, 2021, His Royal Highness Charles, The Prince of Wales formed a Natural Capital Investment Alliance to invest billions of dollars in natural capital opportunities. In March 2021, the United Nations adopted the SEEA Ecosystem Accounting at its 52nd session as a framework to integrate natural capital in economic reporting. In September 2021, the New York Stock Exchange (NYSE) announced a partnership with the Intrinsic Exchange Group (IEG) to list up to $125 trillion annually in Natural Asset Companies (NACs) publicly. NACs are a new category of organizations like the Earth Dollar which holds Natural Capital Assets. On December 21st, 2021, the Mexican Ministry of Finance announced they are creating a new cryptocurrency backed by $3.6 trillion of natural capital assets similar to the Earth Dollar. The Earth Dollar is an idea whose time has come.

Some of the initial main utility applications are:

Creating a Living Economy centered on the well being of all life on our planet is a necessity for the survival of the human race.

Earth Dollar is an asset-based community currency and a type of stablecoin that will power a new economic system and is part of our SDG platform built on a Peer-to-Peer (P2P) Decentralized Supercomputer (blockchain), which we called the Living Economic System. We have combined the Natural Capital Accounting System (“NCAS”) with decentralized blockchain, distributed-ledger, hashgraph, and operating system technologies, which is a series of interlinked and interconnected blockchains to track the revitalization of the Natural Capital Assets and the SDGs. Using consensus technology to categorize, monitor, track and monetize the micro-changes in SDG metrics and Natural Capital Assets is essential to restoring the Earth. We will be issuing EarthDollar Community Currency using the ERC20 standard that acts as digital fuel for the functioning and development of our unique Peer-to-Peer (P2P) Decentralized Supercomputer (blockchain) that runs our Living Economic System, infrastructure, products, and services that integrate natural capital assets via smart contracts, smart assets tokens, and digital token exchange. We anticipate building the Living Economic System (SDG based) on high-speed and scalable 3.0 blockchain, distributed-ledger, hashgraph, and operating system technologies. The Earth Dollar will also be the world’s first anti-inflationary currency because we are incorporating an artificial intelligence controlled mechanism in the system to ensure the buying power remains constant.

The Earth Dollar is expected to be the world’s largest asset-pegged currency, with $5.28 trillion+ USD of assets used to back its value.

HOW THE ASSET BACKING MAKES US DIFFERENT

What sets Earth Dollar apart from other currencies is that it is backed by real assets from the Earth Sovereign Wealth Fund.

The Earth Dollar can help shift our economy from competition to cooperation, from extraction to restoration, and bring peace on Earth.