AN ALTERNATIVE ECONOMIC SYSTEM ON THE BLOCKCHAIN, FOCUSED ON PRESERVING ALL LIFE ON OUR PLANET.

Instead of extracting resources, the “Living Economic System” will generate new wealth by restoring the Earth.

The Earth Dollar is the primary currency of the Earth Restoration Plan (aka the “Tree of Life Blueprint”), a master blueprint developed by the Earth Dollar Team with other grassroots organizations to restore the Earth’s ecosystem while simultaneously ending global poverty in our lifetime, centered on the 26 Enhanced Sustainable Development Goals.

The blueprint came in the form of a dream-vision to the founder of the Earth Dollar; in 2013 during the day of a funeral of one of the indigenous elders he was working with, the founder of the Earth Dollar had a lucid dream-vision, in which a thundering voice from the sky asked him to replant the “Tree of Life”. This gave rise to a two-in-one blueprint and the Earth Dollar. This two-in-one solution, we call the Earth Restoration Plan; once it is fully implemented, it can restore Earth’s entire ecosystem, while simultaneously end global poverty in our lifetime.

The current global environmental, humanitarian, and climate crisis stems from foundational problems of a failed system. Climate change, the destruction of our environment, poverty, the economic crisis, and most of our world’s problems are only symptoms and not the root cause of these problems. If we only put bandaids on the symptoms without actually fixing the root causes of the disease, then the health and wellbeing of Mother Earth and humanity as a whole will never be cured.

Poverty is a human construct and is a manufactured problem. Money is also a human construct. Anything man-made can be re-imagined, and re-constructed. Climate change, the destruction of the environment, and poverty are the symptoms of the failed Extraction Economy (aka Keynesian Economics), which generates wealth for only a small minority of people based on the extraction of resources and human energy, exploitation, predatory practices. hyper-competition, manufactured-scarcity, war, colonization, domination and economic enslavement, unlimited growth, and the destruction of nature.

The Earth Dollar is re-imagining the future. We will be fixing the root causes of our global problems by fixing the problems at the foundational level. Through the Earth Restoration Plan, we will implement an alternative restorative Living Economic System alongside the present extractive economic system. The Living Economy is a hybrid system combining the restorative economy with the gift economy and runs on the Mother Earth Supercomputer (blockchain). The new system aligns our compassionate human values with natural law.

New wealth is generated by protecting and restoring the Earth, as well as by giving your talents to the world. New wealth is also generated by sharing, cooperation, peace, and love. The more you give, the more you will receive. It’s no longer an imagination; we are building it, and invite you to join us to create a more beautiful world.

The Living Economic System is an alternative decentralized economic system created by modeling the World Bank’s Natural Capital Accounting System (NCAS)on our Decentralized Supercomputer (blockchain) as an application to value the assets and generate new wealth. Natural Capital Accounting is the process of calculating the total stocks and flows of natural resources and services in a given ecosystem or region. The Living Economic System can generate new wealth from untapped assets, restored assets, new assets, dormant assets, under-used assets, unused assets, and also monetize new asset classes on the blockchain.

The Earth Sovereign Wealth Fund is backing the value of the Earth Dollar. The Earth Dollar is sponsoring the protection of the Natural Capital Assets within the World Heritage Sanctuaries under a Reinsurance program. The Reinsurance programs guarantee that the pristine ecosystems within the World Heritage Sanctuaries are safeguarded for future generations.

$5.28 trillion+ in assets from the Earth Sovereign Wealth Fund is being used to back the Earth Dollar and the Smart Asset Tokens. 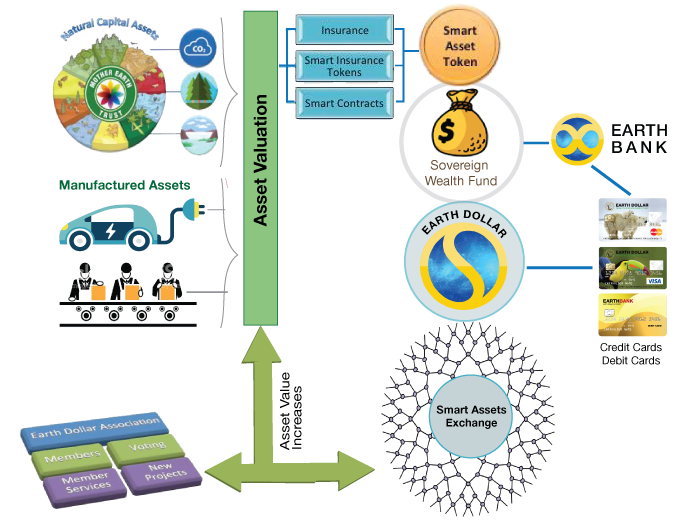 Earth Dollar (“ED”) is different than most fiat currencies because it is backed by assets with an intrinsic value, $5.28+ trillion in earth’s inground assets of precious metals consisting of gold, silver, platinum, palladium, rhodium, natural capital, and human creativity (art, music, videos, content, etc.) via Non-Fungible Tokens (NFTs) have been pledged from the Earth Sovereign Wealth Fund to back the value of the Earth Dollar, and to implement the Living Economic System.

The Earth Dollar’s value is secured against assets placed in a global commons, held in a trust and safeguarded indefinitely for the benefit of Planet Earth and all the life it supports. Global Commons is a term typically used to describe international, supranational, and global resource domains in which common-pool resources are found. Global commons include the earth’s shared natural resources, such as the high oceans, the atmosphere, and outer space. Cyberspace may also meet the definition of a global commons.

The values of the assets are written into the Earth Dollar’s blockchain in the form of Smart Contracts that are publicly viewable on the blockchain portion of our Decentralized Mother Earth Supercomputer (blockchain). Smart Contracts outline the terms and conditions of the assets (including Insurance Assets), to generate Smart Asset Tokens – a type of digital utility commodity that represents the value of physical assets. These smaller units of Smart Asset Tokens can then be traded on a Smart Asset Exchange, representing real assets with intrinsic value that back the Earth Dollar.

As the assets in the World Heritage Sanctuaries are restored and enhanced, the Earth Dollar can increase in value. For example, programs that reverse desertification, clean water sources, or replant forests will all enhance the value of the land and assets associated with it. In addition to deriving its value from the sponsorship of the assets, simply using Earth Dollar also assures the assets are safeguarded for the future.

The Bitcoin network is now the most powerful computer network in the world but has limited functions. In comparison, the Earth Dollar is a dynamic system that is powered by a high-speed and scalable 3.0 Decentralized Supercomputer (blockchain) platform to run decentralized computer applications with unlimited possibilities. A side-by-side comparison of the Earth Dollar system is shown below:

The Earth Dollar will have one of the world’s first quantum-secured Decentralized Supercomputer (blockchain), which makes it relatively unhackable.